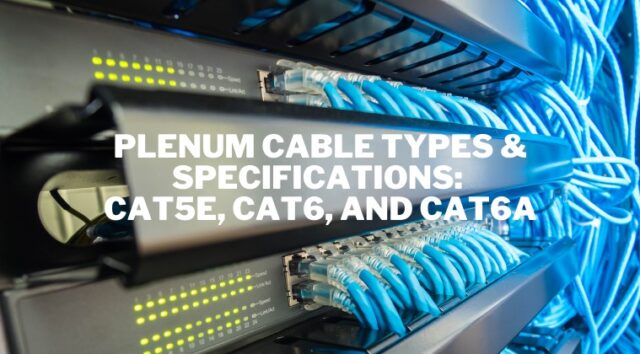 Cables that come with CMP-rated jackets are called plenum cables, and they are deemed fit for installation in the plenum spaces of the buildings. All ethernet cables come in CMP-rated jackets, including Cat6 cable, Cat6a Cable, and Cat5e cable.

Before going further into details, let us first explain what plenum spaces actually are:

Plenum spaces are parts of the building that are used to facilitate air circulation for air conditioning and heating systems. Plenum spaces do so by giving pathways for conditioned/heated or return air flows at a greater atmospheric pressure.

As stated above, plenum cables are those cables that come with CMP-rated jackets. The CMP stands for Communication Multipurpose Cable, Plenum. The CMP rating for the jacket material is the highest rating in the industry. Cables bearing CMP marks are made from the supreme quality PVC (polyvinyl chloride) material.

As plenum spaces have extreme temperature conditions, ethernet cables needed to be installed here should have the finest quality jacket material. The plenum cables are fire resistant and halt fire progression. When exposed to blaze, plenum cables or CMP-rated cables emit no smoke and hazardous gases.

Plenum cables are also UV resistant and are an ideal choice for installation in both residential and commercial properties. The thick coating of the plenum cables also provides top-notch protection against alien-crosstalk, near-end crosstalk, and EMI (electromagnetic interference).

Following are the types of plenum cables:

A Cat6 cable with CMP-rated jackets is identified as Cat6 Plenum cable. As far as jacket qualities are concerned, it’s the same as discussed in the above sections.

When it comes to data speed, Cat6 plenum cable provides 10Gbps data transfer rates over a length of 50 meters or 164 feet and 1Gbps over a distance of 100 meters or 328 feet. As far as bandwidth capabilities are concerned, Cat6 cables come with bandwidth capabilities of 550MHz. These cables also come with both pure copper conductors and copper-clad aluminum conductors. Also, Cat6 plenum cables bearing UTP markings are unshielded twisted pairs, and those bearing STP markings are shielded twisted pairs.

The Cat6 cable runs a wire gauge between 22AWG to 26AWG (depending on the manufacturer).

A Cat6a cable with a CMP-rated jacket is called a Cat6 Plenum cable. The jacket qualities are the same as that of the above two cables, i-e, thick coating, fire-resistant, and UV resistant.

As far as data speeds are concerned, the Cat6a Plenum cable provides data transfer rates of 10Gbps over a distance of 100 meters. WIth 750MHz bandwidth capabilities, the wire can maintain signal strength at longer distances.

The Cat6a cable runs a wire gauge between 22AWG to 26AWG (depending on the manufacturer). The cable is widely used with high-speed applications like 100BASE-XT Fast Ethernet, 10BASE-T, 1000BASE-T (IEEE802.3), 750MHz Broadband Video, and other security networking applications.

The Corporate Video Production Is Now So Essential For The Businesses

Why Should You Choose PHP For Web Development Services?

Why my Hotmail not working properly in 2022